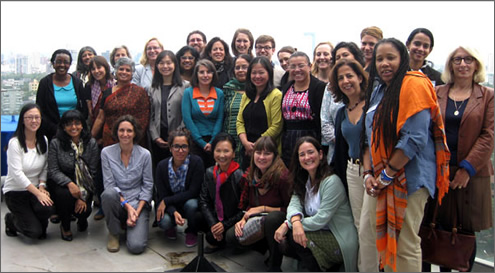 21st-24th October 2013 - GSW was asked to attend the UN Women Expert Group Meeting (EGM) in Mexico City entitled ‘Challenges and Achievements in the implementation of the MDGs for Women and Girls’, to present findings of a paper into ‘gender responsive’ expenditure tracking, commissioned by UN Women.

The paper sought to establish whether it was possible for the GSW initiative to disaggregate expenditure beyond the sector level, to the sub-sector and programme level, tracking expenditure trends that were seen as ‘gender responsive’. An example of these expenditure types are early childhood development, maternal health and women/child orientated social protection. The conclusion from the paper was that although in many low and middle income countries this disaggregation was not possible, there was still a significant number were it was, and that it would certainly be possible to start to track trends in gender responsive government expenditure.

The GSW and other papers presented formed the basis for an overall EGM report, of which the main recommendations will be presented at the 58th session of the Commission on the Status of Women (10th-21st March 2014).