While GDP in the Dominican Republic nearly doubled in the 10 years following the millennium, rising from nearly US$24 billion in 2000 to US$51.6 billion in 2010, government expenditure on education has failed to mirror the increase in national wealth. In 2010, government spending on education was only 2% of GDP, one of the lowest figures in Latin America, and a high number of children remained out of school. In this context, the Coalicion Educacion Digna (Coalition for Education with Dignity) launched, campaigning for the government to meet the General Education Law, and spend at least 4% of GDP on education. 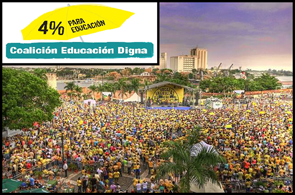 After receiving the backing of hundreds of organisations, as well as the Catholic and Protestant churches, the coalition worked through public campaigning and advocacy to create dialogue with the government. The campaign had great public appeal with yellow umbrellas symbolising the campaign and huge media coverage was achieved through ‘Lunes Amarillo’ (Yellow Monday), a stunt where many people got together, dressed in yellow, across the country every forth Monday of the month. These regular demonstrations were accompanied by several large events involving thousands of people at a time, as well as enlisting the support of national celebrities and a former president.

In response to public pressure, the President of the Dominican Republic participated in a meeting with civil society, where he committed to a new budget proposal in which 2.75% of GDP was approved for the education sector in 2011. Following this, all presidential candidates signed the “Social and Political Pledge” in September 2011, promising that, if elected, they would comply with the General Law of Education. The new president has committed to his pledge for 2013 budget. To celebrate the success of the campaign, the Inter-American Dialogue honoured the coalition with the first Award for Civic Engagement on June 7, 2012.